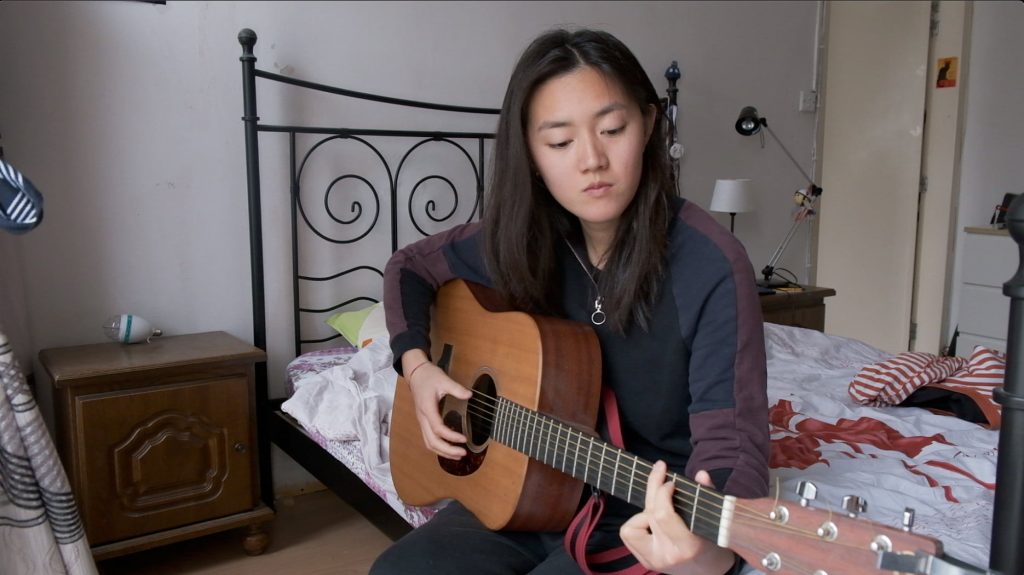 I tried to write my own song

As a person who likes to make stuff, sharing little creations like these can be a bit scary sometimes. I don’t think I’m a good songwriter, singer or even guitarist. Am I thinking like this because I’m measuring myself to unrealistically high standards? Or do the voices in my head speak some kind of truth? Whatever the answer is, I wanted to give it a try nonetheless.

With the extra motivation of a friend, I was able to overcome the doubts and pick up my guitar. I started playing around with some chords, tried to find a combination that sounded somewhat nice and soon after, I started rambling sentences off the top of my head while strumming the guitar. It took me about a week of experimenting with melodies and lyrics, till I reached a result I was happy with. Or better said, a result I was happy enough with. I kept on revising, tweaking small things here and there, only to realise my perfectionism might never allow me to reach a point of satisfaction.

It’s okay if this song is not your masterpiece, I told myself and to be honest, I don’t mind still being a bit clumsy at songwriting. Isn’t that the very thing what makes being an amateur kinda fun? We’re the ones who are still allowed to make crappy things, to not know anything and to just do things because we want to.

That is what writing my first song was for me. Me scratching a creative itch because I wanted to. Me trying to make sense of whatever was going on inside of me because I had to.

Before I go on, here is the song I wrote that I titled ‘Close your eyes‘

In the end, it’s all about storytelling

Like you might know, my artistic background is in photography. So whenever I approach a project, I usually think of it in visual ways. Composition, lighting, sequencing, the implementation of text and the designing of a photobook or exhibition. That is basically the default setting my brain is in when I set out to create a story or express an idea.

This week, while trying to write my first song, I found out that songwriting and photography are actually not all that different. It’s true that completely different senses are being used and that the tools and thinking pattern are completely different. But in the end, I see both art forms as a way of telling a story. I have noticed that what I’m trying to create both in music and photography stems all from the same place: deeply personal thoughts, feelings and experiences.

Even though there were times I got so frustrated that I just wanted to throw my laptop out the window, making this song was overall a very soothing experience. It was as if I was able to bring something that was rooted so deep and had gotten somewhat entangled in each other. Writing the song was like slowly deciphering and disentangling the nots and slowly bringing it to the surface.

The meaning behind the lyrics

I could go deeper into the actual meaning of the song, but to be honest, I’d rather not to. Sometimes it’s nice to let a work speak for itself, to let it get lost in the minds of the ones listening to it and let it get a shape of its own.

But what I can share, is that I got inspired by a recent trip I went on. Here is a photo I took during that trip:

How I made the song

The first moment of inspiration

It was during a sunny afternoon on our terras when the idea for the song came to me. My nephew was playing in the garden below while I was practising the guitar. I had just come back from a trip and was still readjusting to ordinary life at home while I came up with a melody. In the moment itself, I liked how it sounded and started rambling some random lyrics to it. I quickly recorded it using my phone and would build upon that initial recording the following days:

To create is to try. Over and over again

Upon coming up with that first melody, I would spend a few hours every night experimenting with different lyrics, structures and melodies, trying to get to something I liked. Every time I tweaked something about the song, I would take my phone and immediately record it. Only once I ran out of inspiration or when it got so late my eyes started to hurt, I would call it a day.

I wouldn’t work on the song for at least half a day, in the hopes I would forget about the recordings I made the night before. It was only when I forgot, that I could listen to it again with fresh ears and make progressive changes. And that’s what I did, over and over again till I couldn’t anymore.

Seeing our lives as a series of little successes

While I was running today, I listened to a podcast episode from the Tim Ferrris Show and there was one thing that really stuck with me. I don’t remember the exact way they phrased it, but they were saying that our daily lives are actually filled with little successes that we never seem to acknowledge. We tend to focus only on the highest of the highest and if you cannot achieve that, you’re either lazy or a loser. Why do we rely on that one big achievement to define our self-worth and why isn’t getting out of bed and brushing our teeth also worth a pat on the back? An example they used in the podcast, was that of professional NBA players. All eyes and attention are focused on the 2,5 hours the players are on the field. However, the players and their entire teams arrive 3,5 hours prior to the match, to review their game strategy, warm up, stretch and so on. And maybe more importantly, we’re forgetting the thousands of hours they’ve actually spend training. Missing hoop after hoop, over and over again.

Initially, I was doubting whether I should share the song and write this blog post. I felt insecure and told myself that the song was crap and not worth sharing. But it was the idea of the little successes that convinced me to post it anyway. It made me realise that the idea of ‘not being good enough’ is all a matter of perspective.

I wrote my own song because I wanted to try something new and see if I could do it. I enjoyed these evenings where hours passed like minutes and I feel happy that I was able to create something I never thought I would be able to. We don’t need to surpass the best of the best for our work to matter. As long as it stems from a truthful place that feels right for you, nothing should hold us back to pick up that paintbrush, camera, pen or guitar.